Junior Batabano is set to hit the streets of George Town on Saturday May 11, 2019 with the theme “Once Upon A Turtle”, which pays homage to Cayman’s turtling heritage.

“One of our new marketing initiatives for Cayman Carnival Batabano overall going forward is to reconnect the carnival in creative ways with the original meaning of the word ‘Batabano’, which is the native Caymanian term for the tracks left in the sand when turtles go ashore to nest during nesting season, which typically starts around May each year,” explained the Chairperson of the Cayman Carnival Batabano Committee, Donna Myrie-Stephen. “With the turtle nesting season being all about the emergence of turtle hatchlings, it was only fitting that we launch this new initiative with the Juniors.”

This year’s Junior Batabano costumes were therefore designed and created by returning costume designer, Richard Bartholomew of Trinidad, along with Shane James. Each school’s costume(s) will represent some aspect of Cayman’s turtling heritage, as well as a few fantasy turtles.

St. Ignatius Catholic School’s entry this year will have 147 students in four different costume sections under the theme “The Turtle Cycle”. The sections are called: “Emerging At Full Moon”; “The Race For Survival”; “Batabano In The Sand”; and “A Nest Of Eggs”.

John A. Cumber Primary School is returning to the Junior Batabano parade after an eight-year hiatus, and will have 77 students sporting the costume design called “Hidden In The Kelp”.

The Cayman Islands Boy Scouts will also be in the Junior Batabano parade, as well as a local group of young beauty queens.

The event starts with Family Fun Day activities on the lawns of the old Glass House at 1pm, with lots of games, activities, food, mask-decorating, face painting, and much more.

Then at 3pm, pick a spot along the parade route as 400+ children wind their way from the Glass House on Elgin Avenue through the heart of George Town and back to the Glass House where they will each perform choregraphed dances on stage as part of the competition for prizes. The event is expected to end by 6pm.

Later that evening, from 7pm-11pm, the annual Junior Batabano Teen Dance takes place at King’s Sport Center for teens aged 13-16 only. Admission is CI$15 to dance, or CI$20 to dance and skate.

The Batabano Chairperson added: “We’re always thrilled to see so many schools, families, and local businesses continuing to put their support behind this cultural experience for our young people, because they really are the future of Batabano. We sincerely thank all Junior Batabano supporters and sponsors, and we look forward to the continued support.” 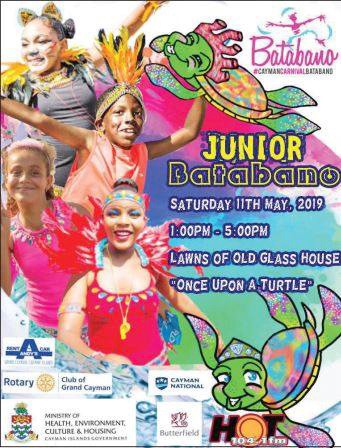