Three new cases of dengue in the Cayman Islands

Since the last update on November 22, 2019, 20 additional results have been received from the Caribbean Public Health Agency (CARPHA) confirming three new cases of dengue in the Cayman Islands.

These three new cases had no travel history, which suggests that these persons acquired dengue within the Cayman Islands.

Since the start of the year the Cayman Islands has sent 150 samples to CARPHA to be investigated for dengue.

Of that number, 34 persons were admitted to the Cayman Islands Hospital and Health City, Cayman Islands showing clinical symptoms that might potentially be dengue. The Public Health Department’s Surveillance Unit continues to deploy enhanced surveillance measures, working closely with government and private sector physicians to review reports of suspected dengue.

Dengue is a mosquito-borne viral disease transmitted primarily by the female mosquito of the species Aedes aegypti, although dengue has also been attributed to Aedes albopictus. Symptoms of the disease include the acute onset of high fever, and at least two of the following:

• Pain behind the eyes

Signs of bleeding (such as pinpoint red or purple spots on the skin, nosebleeds, bleeding gums, blood in urine or stool, or vaginal bleeding) are seen in a severe form of dengue fever known as dengue hemorrhagic fever, severe dengue or dengue shock syndrome.

How is dengue spread?

The Aedes Aegypti mosquitoes get infected by biting a patient infected in the first week of illness. After about 8-10 days of incubation, the infected mosquito is capable of transmitting the virus for the rest of her life. For the mosquito to transmit dengue, it must first bite an infected person. The virus cannot be spread directly from one person to another.

What you can do?

Mosquitos breed in stagnant or standing water; therefore, covering drums and tanks, and cleaning the guttering will get rid of any potential breeding sites. Other stagnant water sources include old tyres, bottles and buckets. The best way to prevent this disease is to protect yourself from mosquito bites. Use physical barriers to protect yourself and your family from bites by wearing long-sleeved shirts and pants, especially at dawn and dusk. Using screens on windows and doors and repair holes in screens will keep mosquitos outdoors. Infants, young children, the elderly and women who are pregnant or trying to get pregnant should take extra precautions to avoid mosquito bites. Everyone should consider using insect repellents containing 50% DEET, Picaridin, IR 3535, and Oil of Lemon Eucalyptus when going outdoors. It is important to encourage your families, neighbours and friends to empty and scrub, turn over, cover, or throw out items that hold water to destroy breeding sites in and around their homes and communities. This will ensure a collective community impact to reduce the spread of dengue in the Cayman Islands. 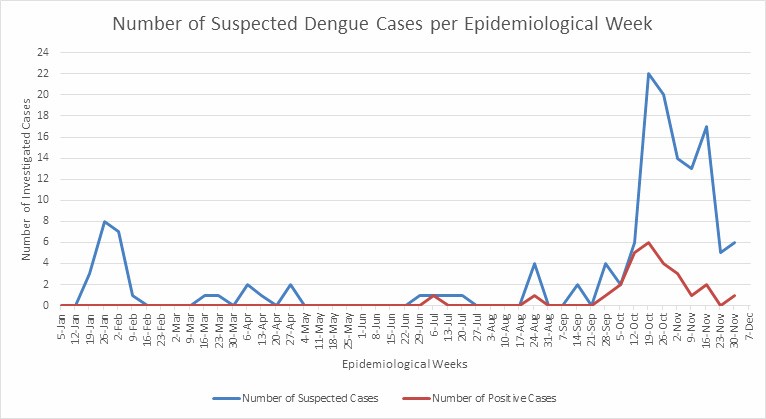