Officials from various sectors of the community gathered last Thursday to witness the unveiling of the Chamber of Commerce’s latest arm to their Cayman Clean initiative, the placing of the first specially designed trash receptacle at Smith Cove.

The Chamber’s Cayman Clean initiative was set up to prevent littering and to beautify the island and is an action item on the Chamber’s advocacy agenda and an action plan under community development. The initiative, led by Councilor Nelson Dilbert and past Secretary Roz Griffiths, has seen HM Prison Service, the Ministry of Environment, Parks Cemeteries and Recreation Unit, the Department of Environmental Health and Cox Lumber all band together to create these new bins that, it is hoped, will help to keep Cayman’s public spaces clean.

He explained that the inmates used treated lumber donated by Cox Lumber to create these aesthetically pleasing units, and designed them with an arch on the top to allow the rain to run through. Mr Watson said that it had been a rewarding experience for the inmates, a project that has been part of their vocational development.

“Most of them came and didn’t know how to read a tape measure,” he said. “We go through the practical and the theory with them. We have about fifteen in the workshop, not everybody is directly involved, but most of them. We have them working on a variety of things. We’ll have a crew working on the garbage bins; we’ll have somebody else building park benches.”

Mr Watson indicated that the benches at Smith Cove were also built by the prison crews.

So far, the inmates had produced ten receptacles, with more in the pipeline, he advised.

Chamber Counsel member Nelson Dilbert is the chair of the CAYMAN CLEAN initiative. He advised that he worked closely with past secretary Roz Griffiths on the project

“We are a community of business owners who help out on the business side but we also want to give back to the community. There are things that we do all year and this is just one offshoot that we were going to start on Earth Day which unfortunately came up against some delays. It’s a campaign that we are going to keep adding to throughout the year, adding more and more bins to more public areas across the island. We really appreciate what the prison has done. Their work is beautiful stuff, really top notch,” he confirmed.

Chamber CEO Wil Pineau led the applause for the prison and the inmates, “the people that we don’t see who created the receptacles” he said, adding, “The inmates are an important part of this whole programme. We could have gone out and we could have bought the structures but we thought it was going to be more of an impactful way for people who are in our prisons to give something back to society so we really appreciate all the inmates who put their hands on any of the ten original structures.”

Mr Pineau said the Counsel would decide if they were going to build even more structures to take them out into the districts.

“We’ve started first in George Town. So, thank you (to Parks and Recreation) for agreeing where to put them because having the structures without collection doesn’t work. We are starting in this location because it’s very public and the hope is, we can go to other public beaches as well. You tell us where you want these placed and hopefully, we can get the resources and the funds to get them to you,” he concluded. 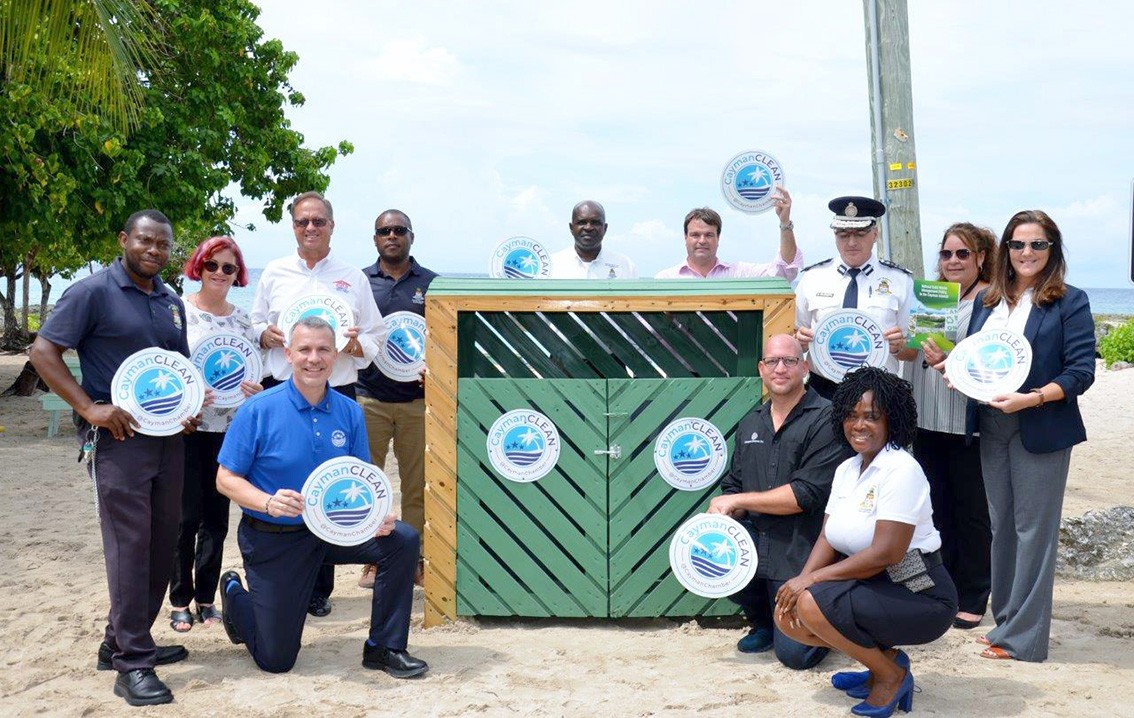