Testing centres will be available across all three Cayman Islands. Persons who are seeking testing or counseling may indicate to the registration clerks that they would like to register for free HIV testing. The procedure involves a quick and simple blood test. No appointment is necessary during the specified times on the HIV schedule and wait times will be short.

“The purpose of these annual observances is to ensure people get tested for HIV in order to know their status, get linked to the care and treatment services they need should they be diagnosed with the infection,” said Laura Elniski, HIV and STI Programme Coordinator at the HSA.

HIV Testing Week in Cayman, more specifically, provides an opportunity for the public to take advantage of free HIV testing that are offered and to become educated about prevention and protection against HIV and other sexually transmitted diseases. “There is a need for people in the Cayman Islands to better understand how HIV is and isn't transmitted and to be reminded of the importance of testing. Testing may lead to treatment and treatment stops transmission,” Ms Elniski stated.

According to the global organisation, UNAIDS, research has shown that HIV treatment is so highly effective in reducing the transmission of HIV that people living with HIV with an undetectable viral load due to treatment cannot transmit HIV sexually. This has prompted UNAIDS to launch its “Undetectable = Untransmittable” campaign.

Since AIDS first appeared, considerable progress has been made worldwide in reducing new HIV infections and AIDS-related deaths. "Knowing your HIV status is key and this is done through testing,” Ms Elniski said.

The results will be available within three working days or less and will be given to the patient in person only, at the clinic where they took the test. This is to protect the confidentiality of the individual and to offer post-test counseling.

How is HIV transmitted?

How do I know if I have HIV?

How is HIV transmitted?

How can I protect myself?

You CANNOT get HIV from:

If you think you have HIV or believe you are at high risk of contracting HIV - get a HIV test. The test is safe and private. You do not have to give your name if you do not want to.

What is HIV Testing?

What does HIV testing involve?

A small sample of blood will be taken from your arm, sent to a laboratory, and tested for HIV antigens and antibodies. The test is always strictly confidential.

What is a positive HIV test?

HIV positive means that antigens and antibodies to HIV were detected, a confirmatory test must be completed to diagnosis HIV, this test is sent overseas and may take up to 10 days to return.

What is a negative HIV test?

HIV negative means that no HIV antigens and antibodies were detected at this time. In almost all cases this means the person is not infected with HIV. With the fourth generation testing that HSA uses called HIV Combo (HIV antigen and Antibody testing) the previous known window period of three months has been reduced to 2-6 weeks.

The test is only accurate if there are no other exposures between the time of possible exposure to HIV and testing.

If you are unable to attend the scheduled walk in clinic for free HIV testing, you can make an appointment for confidential testing at:

For further information about HIV call HIV and STI Programme Coordinator Laura Elniski at 244-2507 or consult your doctor. 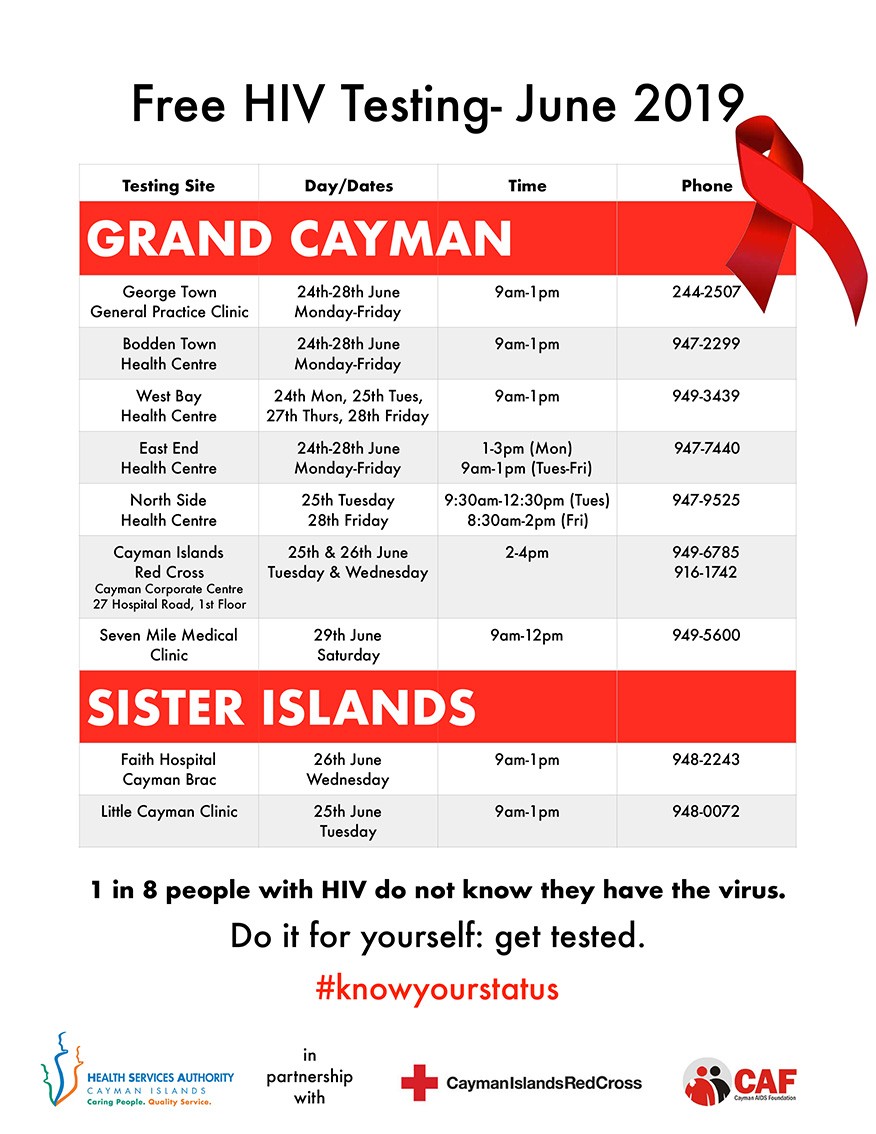