Shoppers visiting a local supermarket over the weekend would have seen the sign on the egg freezer advising of the impact Avian Flu would have on the price of eggs. This increase will most certainly affect every household as egg products are found on every shopper’s grocery list.

According to Maryn McKenna, in her National Geographic Article,  almost 26 million chickens and turkeys have either died, or been killed to keep the disease from spreading. Three states—Iowa, Minnesota and Wisconsin—have declared states of emergency. Layoffs have begun at poultry farms, and the industry is warning that there may not be enough surviving turkeys to fill tables at Thanksgiving. The federal government has released $330 million in emergency funds, and in Minnesota, the National Guard has been called out.

Twenty-six million sounds like a lot of birds—but while the epidemic is devastating to states and to individual farmers, so far it has barely dented the United States’ poultry supply. The U.S., after all, produces about 9 billion meat chickens, 360 million laying hens and 240 million turkeys per year; the current losses equal less than three-tenths of one percent of the total.

She adds that beyond that, there is an international ripple effect as well. Each of the top 10 importers of U.S. poultry products has either banned their being imported or restricted them in some way. Those restrictions extend beyond meat and eggs to breeding stock—which means that, if the epidemic continues, other countries will see cuts in their poultry supply too.

Bird flu is an infection caused by a certain kind of avian influenza virus. Although there are many kinds of bird flu, the kind that now concerns health workers is the H5N1 bird flu virus. This virus is found in wild birds. Most of the time, wild birds don't get sick from the virus. But wild birds can easily pass the virus to birds that are being raised for food, such as chickens, ducks, and turkeys. The virus can cause them to get very sick.

Usually bird flu virus is not passed from birds to people. But since 1997, some people have become sick with this serious, deadly kind of bird flu. Most of these infections have been in Asian countries among people who have had close contact with birds raised on farms. But experts believe that the virus may eventually spread to all parts of the world. So far, no cases of H5N1 bird flu in humans have been found in Canada or the United States. 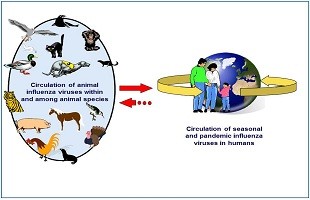